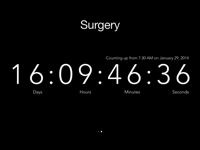 I am home and resting comfortably with my daughter’s favorite, gushy blue pillows that I stole off her bed. Sorry my little darling…you snooze you lose! I’m still trying to get myself into rehab…it is tricky because of changing states. It will fall into the category of “miracle” when it happens. For now, I am recovering at home (snowed in). I hope to walk the mall for an hour tomorrow. Miracles seem to be around every corner…not that they weren’t there before, but they seem to be easier to recognize now. Our tendency to recognize great events seemed to begin along with the commencement of our travels this year. Our journey from Durham, NC to my neurosurgeon’s home base in Great Neck, NY on 1/23/14 included the typical difficulties that seem to follow my family through thick and thin. If my mother, however, has taught me anything, it is to allow an extra day in travel plans when the northeast is involved during the winter. As Mother predicted, our flight on the 22nd was cancelled due to weather. But, due to her wisdom of adding an extra day, I was still able to get to my first scheduled appointment in NY on the 24th despite having to take a later flight on the 23rd. Fortunately, my mother has brains in her head and NOT in her butt. Thank you, Mother, for your help with miracle number one! Although I consider my mother to be quite divine, the second miracle of our journey was…well…to be blunt…, probably from a more Divine source. Allow me, first, to give a little background on traveling with your brains in your butt before I reveal the miracle.

Until 10 years ago, I was driving my car, daily, from Miami Beach, to downtown Miami’s medical center, to University of Miami’s Coral Gables campus, to carpools in West Kendall Miami, and whatever shopping stops I could squeeze in between. Seizures put an abrupt stop to my gas guzzling habits, and it was shortly after that when I developed brain drop symptoms from riding in a car. It has been 10 years since I have been able to ride in a car sitting up, although we still manage to get to doctors’ appointments…but not much more than that. My neurosurgeon explained that I am like one of those bobble head toys that people put on the dashboards of their cars. Contrary to what you would think, though, the negative effects from riding in a plane are much LESS SEVERE than in a car. It probably has something to do with the vibrations. Typically, trauma related to medical travel across the country is primarily triggered by transportation to and from the airports, and only minimally from the plane rides themselves.

So…on the way to the airport on the 23rd…I got a REALLY BAD CASE OF BRAINDROP. Oy…it was so bad that I was having grand mal seizures, while supine in my wheelchair, as my husband wheeled me into the airport. It looked pretty bad, but we knew it was NOT life threatening and would probably resolve within an hour. Airlines, however, are a little funny about having medical emergencies while in flight. For fear of being kicked off of flights, we work very hard to hide such dramatic views of my braindrop episodes from airline personnel. On the morning of the 23rd, my husband had to do some pretty fancy sweet talking to an airport TSA agent who wanted to call emergency medical attention for me. Apparently, I looked pretty bad. I saw the miracle to be the TSA agent’s confidence in my husband’s calm explanation of my condition. Certainly, if 911 had been called, we would have been pulled off of the flight and probably not have gotten on another one for a couple of days. I would have then missed my appointments and my surgery would have been postponed for…well…you get the picture. Sometimes, miracles are dramatic and easy to see. For instance, parting an ocean is grand to all. Sometimes, miracles can be just as dramatic, but more personal. Such as, pulling my brains out of my butt so I can have lunch at a restaurant with my cousin. Most of the time, however, miracles are happening all the time but are only recognized when they trigger a bigger miracle. The TSA agent’s restraint in contacting emergency medical services was one of those subtle miracles. As a result, we made it to NY in time to go through the rest of our plans. I am grateful for that, small miracle of the TSA agent’s cool head. But most of all, I am grateful for the miracle, that God created, called “friendship”. Thank you, all, for your friendship and support throughout this scary time.