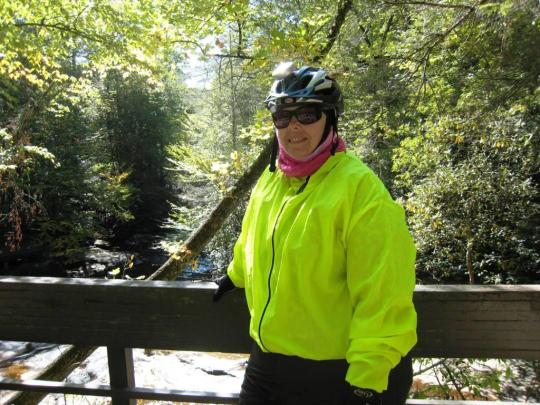 It was this time last year that I had a life transforming experience while riding my recumbent trike. It stimulated my writing the following letter to friends and relatives in honor of the new season of autumn. I have chosen to reproduce it here to share my continuing joy for this new season with hopes for spiritual highs and tolerance for our physical constraints.

The fall of 2008 was just beginning to flourish and reveal her colors to me as my family and I began our second year of life in North Carolina. Along with the beautiful colors outside, the internal drive of my Jewish soul was rolling into motion as the High Holiday season was also being ushered in with the new, northern winds. As these days are full of introspection and prayer, they are also typically chock full of family dinners, hugs and kisses, repetitive telling of old stories, and eating leftovers in between the festive meals of Rosh Hashanah, Yom Kippur, Sukkot, Simchat Torah, and probably some others that I’m forgetting. As there are typically two festive meals for each holiday, my mother generally makes the first and I take on the second one, unless I’m not well enough to prepare a meal in which case my mother will oversee both nights. Regardless, we are always together.

Just before the weather began her change, as the long days of summer still lingered, we experienced a stretch of dark clouds and heavy rain. It was during this time when Mother and I recognized that pragmatics would not allow us to be together for Rosh Hashanah this year. So, we did the best we could at establishing normalcy by sharing our independent dinner preparations through e-mails and telephone calls. Although we each seemed to survive the first night of Rosh Hashanah, my husband and I ended up on the road the next day to attend Mother’s meal for the second night. We drove through four hours of treacherous weather including golf ball sized hail and two tornado hits. Oy vey! We made it to Mother’s in time for desert and I stayed for a five day outing to ensure a more comfortable mother-daughter separation the following week during the Yom Kippur holiday.

Those who know me know that I never travel without my recumbent tricycle. I love to ride it and the hills in Asheville, NC don’t scare me as I’ve become stronger since my move to North Carolina from South Florida 1 ½ years ago. Despite my many medical and neurological limitations, I’m always looking for a new cycling thrill! Being realistic about my limited ability to climb up to the Blue Ridge parkway, my loving bonus father (sounds better than step father, don’t you think?), drove my trike and me up about 5000 feet to the top of a mountain (yes, it gave me a headache!) where I bundled up with a zillion layers of warm, cycling clothes, and prepared for the ride of my life.

The first half of the day was primarily downhill and many “thank yous” to God for my new disc brakes. While riding along the Blue Ridge Parkway, I felt as if I was floating in the sky. The day was clear, the air was cold, and I had evolved into an ingredient of the mountains. It felt as if I was a part of the winding road and truly belonged to the earth. I could see the mountain tops right in front of me, I could feel the wind blow by me and nudge my bike around, I could smell the scent of pine, but, I still could not sing like Julie Andrews in the opening scene of The Sound of Music! Darn it!!!

As I turned off the parkway onto the road which would guide me down the mountain, the vista changed from mountain tops to forest. Waterfalls and wildlife were plentiful. Most of this portion of the ride demanded great attention to technicalities for safety, so it was hard to enjoy some of these things without stopping, but stop and enjoy I certainly did.

While focusing intently on a fast, downhill stretch, an odor of smoke caught my attention. At first it seemed to be coming from a chimney in the distance. Further down the road, the smell became more intense, increasing my alertness for signs of fire. Low and behold, off in the distance to my right I could see a golden glow that frequently goes along with the smell of smoke. “How exciting,” I thought, “I get to ride through a forest fire!!!”

Pedaling closer to that golden glow, I discovered that it was not an exciting forest fire after all. What seemed like fire were actually autumn leaves, brightly golden, bathing in the reflective glare of the sun. I don’t know where the smoke odor came from, but it was clear to me that the beautiful leaf fire was coming from God. It didn’t destroy, it didn’t consume, and although it didn’t warm the body, it definitely warmed the soul.

It was on a descending cycling ride through the Piscah forest during the fall of 2008 that I discovered “God’s fire.” Its brightness inspired senses of peace, strength, and courage deep within my core. I saw many pieces of God’s fire all the way through the forest as I pedaled throughout the morning, and I kept those feelings with me as I struggled throughout the more challenging parts of my ride later in the day. I found God’s fire to be a steady strength which did not vary in it’s blazing by neither bursting out of control nor burning out of fuel.

Throughout the first half of my journey, I was preoccupied with the technicalities of safety in a 3000 foot decent. This downhill experience rivaled any carnival ride that Disney could come up with. Although the rough ride left me with some neurological symptoms related to my Ehlers-Danlos Syndrome, a good rest with God’s fire left me ready to get my feet moving again. The second half of my journey was the most physically challenging ride I have attempted to date, with several high grade climbs that I accomplished with a wheeze from my chest and a smile on my face. I may have a minor injury to my leg from this ride, but received a lifetime of repair to my soul.

I pedaled 35 miles that day, clocked a maximum downhill speed of 50mph, and had a permanent fire lit in my heart. Not bad for one day’s effort!

To all of my Jewish friends, I wish you and your families a happy new year with an easy fast and to everyone I wish to share with you a piece of God’s fire from my heart during this new season!