When the Answer is Clear: Stage 1 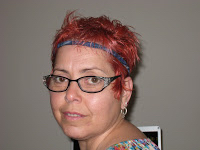 The quest for an accurate diagnosis when riddled with atypical symptoms is emotionally painful and can test the emotional fortitude of even the most devout optimist. So many of us with mysterious ailments have blogged about desperate needs for an ICD-9-CM code, and the validity that comes along with it. Instead of finding explanations for the symptoms that have destroyed our lives, we are dealt cards of shame by medical professionals who will not accept their own limitations.  Because some medical professionals are not able to tolerate ‘unclosed cases’, they circumvent their own, personal feelings of frustration back onto the patient. As I have read in many blogs, this repeated ridicule of arrogant medical professionals is frequently as paralyzing as the physically disabling symptoms themselves. It’s easier to accept the failures of our bodies than it is to accept the fallacy that is fed to us: We are failures to the world. It took quite a bit of emotional energy to fight this message and I am grateful to have an ICD-9-CM code of 756.83 which validates me as a legitimate patient, making it easier to battle the periodic attacks by doubting professionals who seem to feel very comfortable making others feel uncomfortable. Yes, 756.83 has bought me some credibility, just as the many initials after my name, but I STILL guard against such attacks.

In my first blog of 2007, I described how a story profiled on the television series Mystery Diagnosis lead me to a team of doctors who first gifted me with 756.83. My first year of owning 756.83 was wonderful…not that any of my outrageous symptoms improved, but at least I had an understanding of what was happening to my body. This understanding seemed to take a lot of the fear away and I was able to focus on building a new life within the limitations of my disease.

As an optimist, I never focused on the degenerative issues associated with 756.83. Convinced that understanding was the key to overcoming fear, I continued my quest for explanations for new symptoms as they arose. My most recent symptoms include dramatically increased pain levels over the past year. I now have pain in areas that I never knew I had. Lying on a gurney in the ER with a Dilaudid IV only made the pain seem distant. It seems to come and go as it pleases and, despite my talent at tracking patterns, no one has been able to identify a definitive pattern to my most recent attacks of pain.

Once upon a time, before any of this stuff hit the fan, when I was a highly functioning professional, wife, and mother, I spent a year telling a therapist that I felt like something was very wrong with my body. Having a lot of faith in me, my therapist encouraged me to pursue medical attention. Appropriately, I did NOT follow-up on this for fear of being labeled a nut. Hmmmm. I wonder if I would have been labeled a nut if I went to the doctor and told her that I had a feeling that something was very wrong with my body? Anyway, when everything did hit the fan and we first discovered my elevated intracranial pressure…way before I received 756.83…I told my doctor about the feeling I had for the past year. Her response was that she wished I had come to her because usually when patients say they have such a feeling, there typically is something wrong. Frankly, I didn’t believe her and still felt I made the right decision by not pursuing medical treatment based on , “a feeling.” Personally, I don’t see anything wrong with being a nut, so long as you don’t cause anybody harm (including yourself). Unfortunately, however, most of the world confuses being a nut (something like 307.80) with being evil.

Jumping forward to this past year, despite the cushioning effects of 756.83, I once again experienced that familiar feeling of impending doom. I tried to write it off as anxiety from new symptoms and intractable pain, but my intellect would not allow me to ignore what was once before correct. I tried to imagine what it was that my body was telling me…the secrets behind the mysterious, new pain. My imagination became ugly as I saw my internal organs falling down inside of me. It felt like everything was falling and, for probably the first time during my illness, I was terrified. Not wanting to let my imagination get the better of me, I pushed those ugly thoughts out of my head and focused on getting to NY for a follow-up visit at TCI, with all of the appropriate imaging and functioning studies scheduled to my specifications.

The ease with which Dr. B. of TCI first bestowed 756.83 upon me in 2007 was almost comical. It took a few months before I sincerely recognized that one very large piece of my puzzle was in place. Despite this wonderful gift, my hypervigilance continued as I maintained my stance at following up on every illnesses I had until I could piece it all together and fix myself up. Reasonable, right? After all, I am a scientist…able to leap tall buildings without breaking a single test tube! I should be able to fix this enough to get back to work, where my colleagues are still patiently waiting for me to return, right?…NOT! Not only haven’t I been able to fix myself, but things just keep getting worse and I haven’t been able to get to the root of the problem which will halt all of this decomposition. I have lots of ICD-9-CM codes in addition to 756.83, but most of them seem to result from 756.83 and nobody in the world, anywhere, has any answers about how to fix that…except to fix things as they break.

So I went to NY in the spring of 2009 in the hopes of a potential diagnosis which, if I had it, would be easy to fix and bring me much relief. I suppose I should be relieved that I won’t need surgery for this problem that I don’t have, but I would have liked to have something reasonable to fix. I met with several doctors on that trip, and none treated me with the dreaded attitude of some professionals with one semester of psychiatry training. No one accused me of being psycho. There was one commonality between them, however, regardless of the facility they represented. They each avoided eye contact with me as they initially expressed condolences for my condition and stated that I was far too young to have to deal with all these medical issues. This time, the doctors were all sad, and they did not blame me for it. I am grateful for the lack of blame, but the sadness frightened me.

It all came to an emotional head for me when, while meeting with one of the doctors, I assertively zeroed in on the source of my debilitating, abdominal pain…the pain that at times would not go away with Dilaudid IVs, the pain that has kept me from my beloved recumbent tricycling, the pain that is new, and scary, and unknown. Backed into a corner, the doctor seemed to throw up his arms and exclaim that with 756.83…Ehlers-Danlos Syndrome…everything falls down and causes all kinds of pain. I was told clearly that it hurts in my feet because of the falling of my spine and the abdominal pain could be from a dislocated coccyx, bad hip from years of repeated subluxations, neuropathic pain from pressure on spinal nerve roots, or falling organs.

It was the last one that hit me: the falling organs. This was my fear. This was what I felt in my heart had been happening to my body. This is what had been scaring me for so long now. I was facing my fear right in the face of what we tend to pray for: a doctor who takes our symptoms seriously. I got what I prayed for. I got my answers. But I didn’t like my answers. The office had to work around me the rest of the afternoon because I was so hysterical that I could not be moved from that examination room for some time.

So what do we do when we finally satisfy all the questions but we don’t like the answers? I don’t know the entire path yet, but I know that the first thing you do is cry. Then you borrow your mother’s credit card while in New York and go shopping…it’s kind of like binge eating. Then you go right back to crying.

And then you isolate so your crying isn’t disrupted, because it stinks to have to keep up a cheery face when you really need to be crying. You dye your hair bright red as a way to scream out something to the world, but who knows what it is you’re screaming out with bright red hair. Then you sniffle. Then your hair fades to pink. Then you chuckle at your hair and put on long earrings and hang out at Starbucks…and you blog.

To be continued as I migrate into Stage II…